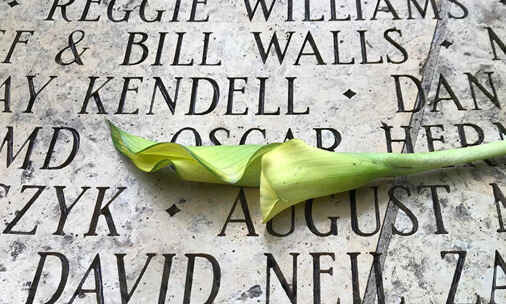 Thank you for Supporting the National AIDS Memorial!

CLICK HERE TO READ THE TOUCHING STORIES FROM THE SAN FRANCISCO CHRONICLE FEATURED SPECIAL SECTION ON THE NATIONAL AIDS MEMORIAL.

2021 is an important marker in the history of the National AIDS Memorial. It has been 40 years since the first cases of AIDS were reported in the United States. It is also 30 years since the first volunteers gathered in an abandoned Grove in San Francisco’s Golden Gate Park to create a living memorial for healing, hope and remembrance.

Much has happened over the course of four decades. Medical and scientific advancements now provide greater hope to long-term survivors and others living with HIV, with optimism for a cure in the future. Through the leadership of Speaker Nancy Pelosi and former President Bill Clinton, the Grove became our nation’s federally-designated memorial to AIDS. The AIDS Memorial Quilt, now containing 50,000 panels, is now part of the National AIDS Memorial.

Today, the Grove and the Quilt are at the heart of the National AIDS Memorial, where together, their power and beauty, help tell the story of AIDS, offer hope, and help ensure that the world never forgets those we’ve lost.

One of our early supporters, James C. Hormel, a long-time philanthropist who during the Clinton Administration became the first openly gay U.S. Ambassador to serve abroad, hosted the first “friend-raiser” for the Grove. Before his passing in August, in that same spirit of compassion and generosity, Ambassador Hormel and his husband Michael P. N. A. Hormel launched a 30th Anniversary Donor Challenge to match up to $30,000 of all new and increased donations received this year.

Your personal donation is critical to the continuation of our work, but also for the realities we face with ongoing costs of preservation, conservation, maintenance, and repairs of both the Quilt and the Grove.

Join with us in meeting our 30th Anniversary Donor Challenge with a personal gift today in support of the National AIDS Memorial.